A green wall in Chiswick!
Posted by : Clean Air for Schools

Just metres away from a six-lane main road with 100,000 vehicles per day, St Mary’s in Chiswick was one of the most polluted schools in London a few years ago. With pollution levels many times over the legal limit, the Headteacher sometimes had to resort to restricting outdoor play time when pollution levels were very high.

Concerned about what impact this could be having on the children’s health and wellbeing, a group of parents, led by Andrea Carnevale, set up a project to tackle this issue and create a cleaner and safer school environment for the children.

A huge fundraising campaign was launched by the parents and school to secure funding from the community and local businesses. With a budget of over £75k, and offers of ‘pro bono’ technical support from specialist consultancies, the school was able to create a whole-school approach to improving air quality, which included installing a huge green wall along the boundary with the A4, as well as putting filters in classrooms to tackle indoor pollution, and other technological and behaviour change initiatives.

While this budget is more than will be realistic for most schools, it is worth bearing in mind this school has a very long boundary (longer than most schools will have), and this has an impact on costs.

The simple and most cost-effective option for green infrastructure is to install an ivy screen (ivy trained on a trellis support), because ivy is cheap and a vigorous climber. However the large fundraising budget and the unusually long wall for this school enabled the school to be more adventurous and creative with the planting.

Arup, an environmental engineering consultancy, offered expertise in green infrastructure and environmental design and also on how to maximise the wellbeing, ecology and sustainability benefits.

The living wall that was installed (by ANS Global) is 134m long, consisting of 20,000 plants belonging to 25 different plant species. There is an ornamental wall (35m), climbers and trellis (70m), and an educational wall (29m). Each segment was designed in response to the adjacent area, its use and the value provided. 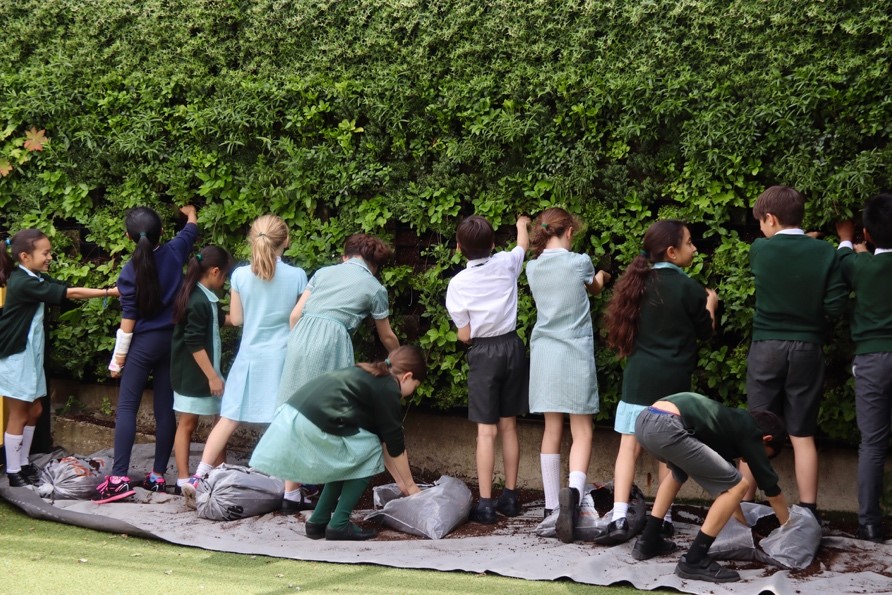 The green wall (and Airlite paint which was put onto some surfaces of buildings) has shown reductions of up to 28% of NO2 concentrations across the school.

-      Greater diversity of activities and

Arup conducted some surveys with pupils after the installation. 47% of users said that they spend more time in the area where the green wall was installed, the main reason being that they believed it has created a “healthier environment”, evidence of the improved wellbeing of the pupils as a result of the wall.

Take a look at Groundwork's Air Quality Green Infrastructure toolkit for guidance on how to introduce green infrastructure effectively to your school.

A helpful document for school PTAs and governors, listing all the advantages and important considerations with green screen, is available as part of a Green infrastructure toolkit from Cleaner Air Sooner.

This case study was provided by Cool World Consulting.